Smoke ‘Em If You Got ‘Em | General Tax Fraud 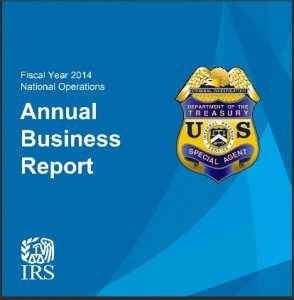 Every year, the IRS Criminal Investigations unit (IRS-CI) releases a surprisingly entertaining report detailing their efforts to protect the Treasury from scammers, fraudsters, and cheats. This year’s edition reveals that, due to budget cuts, activity is actually down. In 2014, IRS special agents initiated 4,297 criminal investigations (down 19.1% from 5,314 in 2013) and recommended 3,478 prosecutions (down 20.4% from 4,364 in 2013). There were 3,272 indictments and 3,110 convictions, which shows the IRS won’t take you to criminal court unless they’re pretty sure they can really nail you to the wall. And 80% of those who were convicted won themselves an all-expense paid trip to a federal penitentiary.

IRS-CI targets all sorts of misbehavior and shenanigans: Swiss banks, corrupt politicians, identity thieves, and crooked tax preparers. They also cooperate with other federal agencies, helping the Drug Enforcement Administration catch drug smugglers and the Department of Homeland Security block funding for terrorists. But some of the most entertaining stories fall under the “general tax fraud” category. Here are four to brighten your April 15:

Look, we know paying tax bites. But you don’t have to cheat to bite back. You just need a plan. There’s no shortage of court-tested, IRS-approved strategies for saving. So if you haven’t asked Bordeaux and Bordeaux, your Charlotte Area CPA Firm, about our planning service, what are you waiting for?